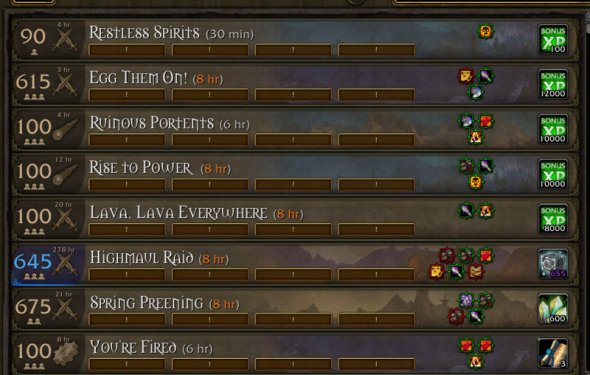 Once he's done that, you need to hit Optimized, which, confusingly, is in the past tense these days. There are drop-downs that let you pick different presets, as well as various other options, but that's for another guide on another day.

The above is my baby paladin, the poor little thing was woefully undergeared before the Timeless Isle came along, and she's really just getting there now. But the gear she has is now optimzed, and if you look to the top right of the screenshot, under the purple "Find Upgrades" button, you might just be able to make out the "Export To: Addon, SimC" line. SimCraft is a program for another day, so we're going to export this to the addon instead. This will generate a window with a big long jumble of code.

OK, once we've got that onto the clipboard, we're done with the website, but leave it up and let's log into the game. Once you're in, the addon will manifest itself as a little pair of robot eyes in an icon on the minimap. Hit that icon, then you should see the import screen below. If it doesn't appear immediately, click "Import" on the left-hand side.

You'll want to drop the string text from the clipboard into that box at the bottom then hit "Import!" and you'll be away. It'll tell you, first and foremost, just exactly what you need to do, so say, for example, you need to reforge nine items, gem five, and enchant seven, that's what it'll say. You should then hit the relevant sections down the left-hand side to get the information you need. I was particularly impressed with the reforging window, which appeared automatically when I headed over to the reforger with my pally, and showed me exactly what should be reforged, and how much it would cost. At the top of the screen is a button that says Reforge! that does all the work for you, no more clicking and dragging. Simply click that button, and it's all automatic!

Now obviously these reforges, the stat weights, the priorities, everything is taken from askmrrobot.com. There's no option to change these in-game, so you would still have to log in and out to get your reforging recommendations set up with every new piece of gear. Some might find this tiresome, but regular robot users will be accustomed to it.

For gems and enchants, the addon is not quite as helpful, but very very nearly. It will tell you what you need on the Gems and Enchants side of things, and where to put them, but the feature that really appealed was the Shopping List, which gives you just exactly that, a shopping list of all the gems and enchants, or the materials to create them. It will even send either a message or a whisper or an in-game mail to anyone you specify that might be able to help you out with your gearing needs.

When you open up the Auction House window, the shopping list will appear automatically, and clicking an item on it will automatically search the AH for that item. Unfortunately, it doesn't seem to work with Auctionator or Auctioneer, only the default auction house windows. What's more, the lovely robots have informed me that they will soon be adding auto-gemming to the addon!

This has been something of a whistle-stop tour of Ask Mr Robot's addon, but it's so full of easy to use features that I could rattle on all day. However, I have a policy of showing you more than just one method to do stuff around here, so if you're after something lighter I have a couple more addons to cover.

For an addon called ReforgeLite, this does a pretty great job of being really rather daunting to look at. I know several people who have opened this up, taken one look at it, and uninstalled it, never to be used again. Simply because it looks like this:

It really is rather daunting, but all it's trying to do is indicate what's good and bad about your current gear. If I was the makers of this addon I'd actually make the grid on the left hideable, and only show the right-hand half of this screen, because frankly, it's really all you need. ReforgeLite is, once you know how, supremely easy to use, and while it only deals with reforging it does so rather well.

But it's not exactly intuitive, so let me run through exactly what you need to do. First up, look at the top in the middle. There's a drop-down there called "presets", and that should load up various build options for your current character. Pick one of those, then look at "Target Level" a bit further down to ensure you're after the right one. Then you've got your stats. Say you want to mess around with the preset you chose? No problem! You can prioritize different stats, change caps, whatever you like in the section where the stats are laid out.

Once you're done, hit "calculate". Your game may well hang for a moment, mine does, but fear not, it will return. Next up, you will want to scroll right down on the scrollbar to the right, until you see the button labelled "Show". Hit that button and this will happen:

Yep, that's another screen indicating the reforges you need to make. The ones with checked boxes are already in place, so it's only the ones without ticks that you'll need to do. As you can see, it also tells you the cost, and offers a one-click option to get it all done. Hit "Reforge" and you're away! No clicking and dragging, no nothing.

I have a love-hate relationship with ReforgeLite. It has the advantage of not having to log out and use a website to get reforging done, but its UI layout is so overcomplicated and excessive. Of all the screen space it occupies, you need maybe a third at the most, and that's if you want to play around with the stat weights etc. If you don't, you need all of three buttons. Three buttons, out of the huge initial window. I have no issues with the smaller one that pops up that allows you to actually reforge, though.

Reforgenator should really swap names with ReforgeLite. It's lite, for starters, far lighter than ReforgeLite, and uses the absolute minimum of screen space. However, it has one huge flaw, in my eyes, that I'll get to in a moment. First, let's have a look at the UI. This is brought up by hitting the minimap icon, for me at least opening the reforger window doesn't bring it up automagically.

So, it's pretty light. See what I mean about the name swap? So, you've got three drop-downs. The top one is for your spec, it gives you literally just three options, drawing the weights and caps etc from Noxxic's advice. But you can edit these models in the interface/addons menu, spec by spec, and also make your own models, so if you want to save a modified version of the default resto shaman model, you can do that, via "add new model" in that menu. It's not as easy as reforgelite, but once you've done the initial setup you're golden.

The next two dropdowns just ask what should be reforged, and again ask whether it's for raiding, dungeons, or PvP. This is simply a level check for things like hit and expertise caps. Now, you've got the recommended reforges at the bottom. This is where Reforgenator falls down for me. Note the absence of both a gold cost and a "reforge" button? Well that's because neither is there. You have to drag the icon from the panel over to the NPC's panel, and do the reforge as specified in the Reforgenator screen. Manually. For every piece.

Now, this is far from the end of the world. And if you're just getting started on reforging addons, Reforgenator is a great little addition. It's simple, not daunting, and easy to use. But it isn't automated. Swings and roundabouts!