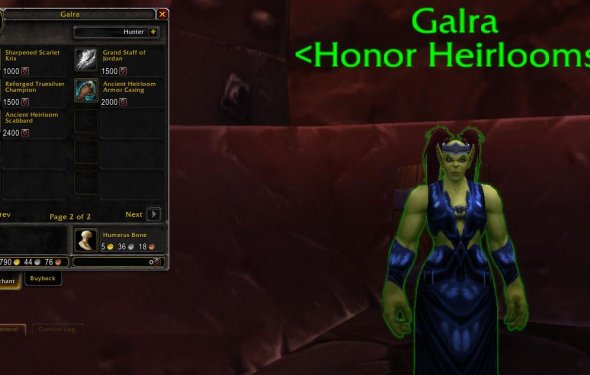 Patch 6.1 implemented the Heirlooms tab in the Collections interface, and thus players now only need to acquire heirlooms once to learn them. Once learned (like pets, mounts or toys), players can right-click on an heirloom to add it to that character's inventory. Duplicate heirlooms and heirlooms that have been learned but are not useful to the current character can (like toys) be deleted without any further issue if they have not been enchanted.

The vast majority of heirlooms scale from levels 1 to 60, but can be upgraded with tokens three times: once to be effective from levels 1 to 90, secondly to 100, and finally to level 110. Upgraded heirlooms, when created from the heirlooms tab, will show up in characters' bags at the upgrade level seen in the UI.

Enchants only apply to individual copies of heirlooms (unlike upgrades), so if an heirloom has been enchanted and it is no longer useful to the character wearing it, consider mailing the heirloom to another character rather than deleting it.

Now-upgradeable heirlooms acquired before Patch 6.1 will automatically appear in the heirlooms tab at upgrade level 1/2 (effective up to level 90) regardless of whether or not they were actually upgraded, with the heirloom items themselves staying in the character's bags, bank or void storage.

Heirlooms with attributes that are no longer used (such as dodge or PvP resilience) were updated to provide another secondary stat (crit or haste).

The following vendors sell heirloom shoulders, chests, trinkets, necklaces, and weapons, and both sets of the heirloom upgrade tokens for gold:

Liliana Emberfrost in the Champion's Hall of Stormwind City and Galra in the Hall of Legends of Orgrimmar also sell (formerly) PvP-focused heirlooms in exchange for [Honor Points].

Guild vendors sell heirloom helms, cloaks, and legs with guild reputation requirements. Helms and cloaks merely require honored guild reputation, while legs require being in a guild with [Working Better as a Team]:

Beyond the vendors, there are a few other sources of heirlooms:

In the Brawler's Guild, once players reach rank 8, they may purchase the [Brawler's Razor Claws] (90 · 100) for 650 from Quackenbush at Bizmo's Brawlpub in the Deeprun Tram beneath Stormwind or from Paul North at the Brawl'gar Arena in Orgrimmar.

Players who manage to win the Grand Prize or get Second Place at the weekly Stranglethorn Fishing Extravaganza at Booty Bay in Stranglethorn Vale may elect to receive the (90 · 100).

Four new rings were added in Patch 6.2.0 that are rewards from completing Garrison missions: [Admiral Taylor's Loyalty Ring], [Captain Sander's Returned Band] and [Signet of the Third Fleet] are from rare shipyard missions, and [Touch of the Void] from The Consuming Void, a rare follower mission.

[Defending Champion] and [Returning Champion] are PVP trinkets obtained after completing the 12-trinket quests for the Gurubashi Arena and Darkmoon Deathmatch respectively.

As previously mentioned, heirlooms as sold by the vendors are effective from levels 1 to 60. Upgrade tokens are available for purchase to upgrade heirlooms to be effective up to level 90, and again to level 100.

Additionally, during holidays like Love is in the Air or the Lunar Festival, vendors tend to sell upgrade tokens in exchange for the event currency. See the four upgrade token articles for details.

There are four achievements for learning heirlooms, with the last requiring 35 unique heirlooms learned. Upon unlocking the fourth achievement, players will receive a letter in the mail with a [Clinking Present] attached. Inside the present is the [Chauffeured Chopper], a mount that can be used by players of all levels.

An heirloom's stats correspond to the item level of a blue quality item requiring its wearer's level until the heirloom stops leveling, as specified by the tooltip. However, heirlooms give bonuses to four different stats from a far lower level than blue items start doing so. At level 100, heirlooms are equivalent to an item level 605 rare item, and will ultimately be replaced by questing, instancing, and PvP at the maximum level. The that were dropped by Garrosh Hellscream are instead equivalent to an item level 620 rare weapon at level 100.

Source: wow.gamepedia.com
Related Posts
Categories
Latest Stories
Upgrading items wow As you’re probably aware we introduced a new system in 5.1 which allowed...
Wow account bound gear Update: The pre-Legion patch is live! Hop in to see how Blizzard has nerfed...
wow item generator I m so glad I kept mine in my bank in case this ever happened! The one...
best gear in wow With Patch 7.1: Return to Karazhan arriving on October 25, we wanted to...
Heirloom items in wow Patch 6.1 implemented the Heirlooms tab in the Collections interface, and...