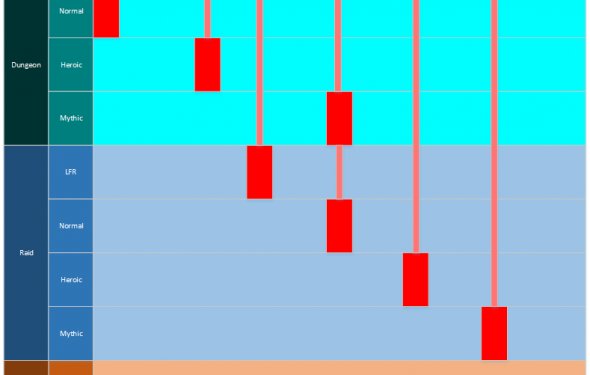 Apologies for the delay in getting information out on this - our initial focus was on putting out other patch-day fires.

Yes, this reflects a deliberate change, but it's also not working exactly as we intended. The scaling may be too steep, and the fact that unequipping a piece of gear can ever be helpful is a bug in the system. We'll be looking into making changes to correct this in the very near future.

Power progression is an essential part of the WoW endgame, and the last thing we want is to undermine that. We stressed the importance of that progression when discussing how the level-scaling system worked in Legion around the time of the expansion's launch, and explained why we then had no plans to scale foes' power based on gear. But as we've watched Legion unfold, we've come to observe some side-effects of our endgame content plan and the associated rewards structure that made us reconsider.

We've never had the initial outdoor world content stay relevant for this long in an expansion before. By the end of Mists of Pandaria, for example, the mantid of Dread Wastes that had once been reasonable foes were completely trivial. They'd basically evaporate if a raid-geared player looked in their general direction. But there wasn't much reason besides achievements or completionism to revisit the Klaxxi dailies once Isle of Thunder was out or, later on, Timeless Isle. And the enemies in those later zones could be tuned to a proportionally more challenging baseline difficulty.

But in Legion, while the new content in Broken Shore is the focus of 7.2, and we've made sure that the core outdoor rewards (both dropped and from Nethershards) are superior to the rep-related rewards from the original factions, the intent is not for the Broken Shore to completely replace the rest of the game. You'll still go back to the other Broken Isles zones for emissaries, Legion Assaults (coming next week!), Order campaign quests, improved world quest rewards, and more. And as 7.1 and 7.1.5 progressed, we could see that even with Nighthold gear the pacing of combat was getting a bit silly - what would happen once new content made that level of gear more common, and once the Tomb raid pushed limits even higher?

To reiterate, power progression is an essential part of the WoW endgame. We absolutely want you to feel overpowered as you return to steamroll content that once was challenging. But there's a threshold beyond which the game's core mechanics start to break down. When someone trying to wind up a 2.5sec cast can't get a nuke off against a quest target before another player charges in and one-shots it, that feels broken. And even for the Mythic-geared bringer of death and destruction, when everything dies nearly instantly, you spend more time looting corpses than you do making them. You spend an order of magnitude longer traveling to a quest location than you do killing the quest target. You stop using your core class abilities and instead focus on spamming instants to tap mobs as quickly as possible before they die.

Our goal is basically to safeguard against that degenerate extreme. We tune outdoor combat for a fresh 110 around a 12-15sec duration against a standard non-elite, non-boss enemy. It's great for gear, over the course of an expansion to cut that time in half, or even by two-thirds. But once you get down to a duration of one or two global cooldowns, the game just wasn't built to support that as the norm. (Note that this is an current-content endgame concern; running legacy content for completion/transmog/etc. purposes is a totally different story.)

The intent of our change in 7.2 was to smooth out that progression curve a bit, not flatten it out, and certainly never to invert it. If you get a great set of item upgrades that make you 5% stronger, maybe the world gets 1-2% tougher. Perhaps instead of getting 400% stronger over the course of the expansion relative to the outdoor world, you only get 250% stronger. But you should always be getting more powerful in relative terms, and upgrades should always matter. From some reactions so far, it sounds like we may be off on that tuning. And as noted above, the fact that unequipping items can ever be helpful is a bug that we'll be investigating and fixing.

Source: us.battle.net
Related Posts
Categories
Latest Stories
Upgrading items wow As you’re probably aware we introduced a new system in 5.1 which allowed...
world of warcraft boa gear Part 1 Buying Boosts Visit the in-game store. This simplest way to get...
Resources Harris county department of education responsive education solutions pacific...
wow item generator I m so glad I kept mine in my bank in case this ever happened! The one...
Gearscore addon wow First, here is the original blue post as well as the follow up clarifications:...