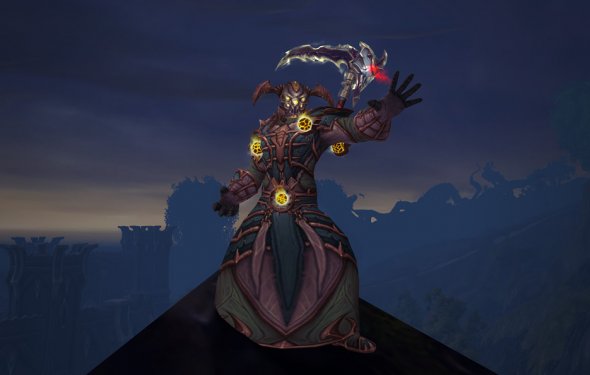 "PvP is no different: players should be rewarded, and their characters should become more powerful, for participating in PvP—and in Legion, we want to reward them in a way that matters not just in PvP, but across all of the game."

In a new blog post, World of Warcraft senior game designer Brian Holinka outlines a series of changes Blizzard is implementing in PvP gear for its next expansion pack, Legion.

It's a radical rethink of how the developer handles gear - something which is the backbone of the World of Warcraft experience, as Holinka writes: "One of the foundations of the game is being rewarded for your efforts with gear that makes you stronger."

The result is a grand simplification of a "needlessly complicated" system: "Going forward, we feel it would be better if the gear awarded in PvE and PvP was just the same. No special item levels. No PvP-specific stats. Playing any part of the game will allow you to get rewards that are meaningful everywhere, " Holinka writes.

For designers of games with gear or item systems, and particularly, of course, RPGs and MMOs, it's a fascinating look into what goes into making changes to make a design work better with how the game is actually played.

It's also a brief history of how the company has tackled the gear issue, and worth read for that reason, too.

Source: www.gamasutra.com
Related Posts
Categories
Latest Stories
Interesting How many entrepreneurs become millionaires where to get business cards...
Guide How to recharge car ac How much does it cost to replace a central air conditioning...
Reference Book How to prevent bell s palsy? How to do magic tricks with no equipment Le...
Resources Ust courses vegan crowdfunding adobe certification online class objectives...
We are supported Why business fail what business quarter are we in which manager has the...