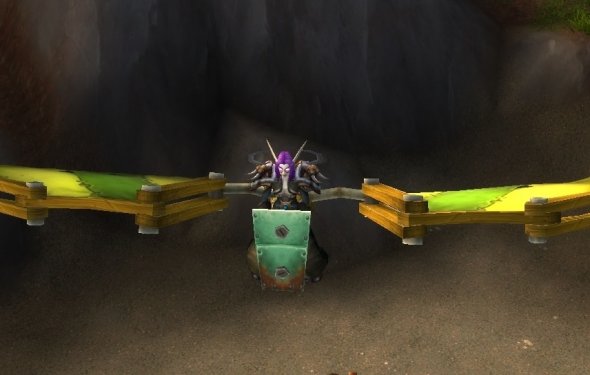 As you’re probably aware we introduced a new system in 5.1 which allowed you to upgrade some gear a few items levels at a time by paying with the PvE (Valor/Justice) and PvP (Conquest/Honor) currencies. In 5.2 the Voidbinders (NPCs who perform item upgrades) took a break to let people focus on just acquiring new items with their points. It also gave us time to evaluate the system, and decide how we want to continue supporting it.

We still like the upgrade system for PvE as a way to make steady progression against bosses you can’t quite kill yet. You very predictably earn Valor every day, and use that Valor toward increasing your character’s power and overcoming an obstacle. It’s also good that Valor always has a use; it’s a currency we always want to be valuable regardless of where you are in progression.

The thing we didn’t like about item upgrades previously was that it created these rather brutal decisions where you were essentially betting against yourself, or having to offload large sums of Valor to keep from capping. If you just got a belt, but next week you’re going up against a Heroic boss that drops a best-in-slot belt for you, you might bet that you’ll get that belt and so you’d wait to upgrade it. But that’s complicated by the issue of being Valor capped and needing to spend some. So you dump Valor on upgrading a different slot and just hope you don’t replace that one instead.

In 5.3 the costs are dramatically cut to the point that these decisions are far less brutal, and you can pretty easily upgrade every slot instead of hedging bets against specific slots being replaced or not. In the example above you could go ahead and fully upgrade that new belt for only 500 Valor, as opposed to the 1500 it would have cost you before.

"...no new PvP items for the foreseeable future will use the upgrade system."

It shouldn’t be too surprising, given that we’ve already come out and said it some weeks ago, that item upgrades are essentially not coming back for PvP. It’s something a lot of PvPers asked that we remove, it’s something we didn’t feel worked out too well, and so unsurprisingly the result is that it isn’t coming back. We’re still probably going to allow the Season 12 items that had previous upgradability to remain upgradable, as noted in the bullets above, but it’s not something we’re absolutely certain about at this moment. We’ll let you know if that changes.

Because gearing in PvP is based almost entirely on currency purchases, Conquest and Honor already always have a use, and we ask players to amass a lot of them to continue gearing. Honestly it was fairly unanimous that balancing the means of gear acquisition against upgrades just didn’t make good sense, at least with the current systems.

Source: worldofwarcraft.com
Related Posts
Categories
Latest Stories
Interesting How many entrepreneurs become millionaires where to get business cards...
Guide How to recharge car ac How much does it cost to replace a central air conditioning...
Reference Book How to prevent bell s palsy? How to do magic tricks with no equipment Le...
Resources Ust courses vegan crowdfunding adobe certification online class objectives...
We are supported Why business fail what business quarter are we in which manager has the...