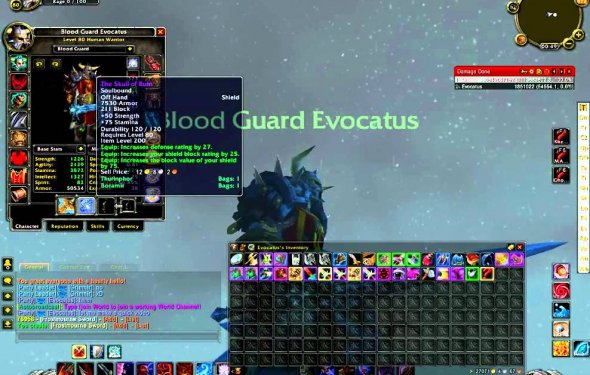 Blizzard added a lot of items into World of Warcraft. Inferred from Items' ID, I think there are more than one hundred thousand items in the game. However, as players, we can only use around two hundred items in the usual. Besides, not all items are provided for players. Some were added into the game as debugging tools. Some are out of print, like totems. And some are just for fun. Although these items can be acquired now, they were legal to be acquired before. But today, I will show you 10 super rare items, which you can never acquire. Whether you plays WoW from beta, has visited Blizzard headquarter or has sponsored Blizzard, you can't get anyone, because they aren't developed for players.

As its name indicates, the set is exclusive for GM. It has three pieces – hat, robe and boots. The blue-and-black set is the iconic color of Blizzard. Besides, the design of the set is unique. We can recognize it easily.

As we know, GMs provide 24 hour service in WoW. But you may not know that GMs doesn't serve us directly through game. They usually use kind of communication software tool to do most jobs. So, they rarely appear on Azeroth. And if you are luck to see them in the game, they usually dressed the armor set. Of course, some may dress their favorite equipment as follow:

In fact, it is not easy to be a GM. As the representative of developer/operator, they bear the responsibility for communicating with players. They need to reply the request from all servers' players. We can see how busy they are. So, when you send request to them, please be patient. It is also a kind of friendly.
-
No. 9 Frostmourne

Frostmourne, the legend weapon of Lick King Arthas, is the most famous weapon in WoW. Held it, you can lead thousands scourge armies…….but, really?

In fact, Frostmourne doesn't only exist in the story. It's real in the game. But it may be just developed for fun by Blizzard, because nobody got the weapon. Even so, Blizzard also makes an effect for the weapon, and there is real Frostmourne model in the game. So, although we can't get Frostmourne in the game, we can get the model to change our weapon to be Frostmourne.
-
No. 8 Ashbringer

Ashbringer, the opposite of Frostmourne, can purify all evil stuffs. But it still has a lot of commons with Frostmourne: Both of them are famous, owned by legend and are subsistent in the game.

Found by the Dwarf king Magni Bronzebeard, Ashbringer's popularity may not match with Frostmourne. But we must keep in mind that it is the weapon to crush the Frostmourne.
In fact, Ashbringer has its own twin brother Corrupted Ashbringer, which dropped by Four Horsemen in Naxxramas in old world. But it is also out of print now.

Ashbringer is an interesting weapon that Blizzard likes to spoof it. From WoW datebase, we can find a spoof weapon named Tigole'sTrashbringer. But we can't get it in the game. In WLK beta, the zone for Death Knight hasn't been completed. So, Blizzard design a temporary quest for players to get talent points and provide this weapon and some gold as rewords. The weapon inherits the design of Ashbringer, but is totally a junk.

Besides, there is another Ashbringer like weapon called Dustbringer in the game. Before, there is a rumor that we can get Ashbringer though fishing. Of course, it is proved a false. But Blizzard spoofs it again. They added Dustbringer which we can fish it out. More than that, the attributes of Dusbringer is quite similar to Ashbringer. -

Source: 2p.com
Related Posts
Categories
Latest Stories
Upgrading items wow As you’re probably aware we introduced a new system in 5.1 which allowed...
world of warcraft boa gear Part 1 Buying Boosts Visit the in-game store. This simplest way to get...
Resources Harris county department of education responsive education solutions pacific...
wow item generator I m so glad I kept mine in my bank in case this ever happened! The one...
Gearscore addon wow First, here is the original blue post as well as the follow up clarifications:...