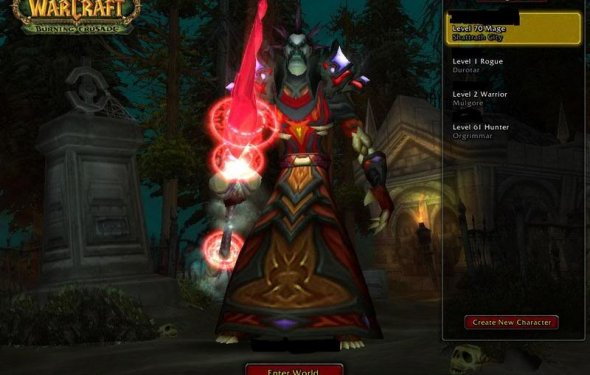 What could have been World of Warcraft’s death knell turned rather spectacularly into new success in Legion. The game is more popular and well-regarded by players than it has been in years, and keeping that up is the next challenge. Patch 7.2 is not only Legion’s largest, but the biggest in the game’s history in terms of amount of content and number of changes - all despite barely touching classes themselves. We spoke to Blizzard about what all that means and how it came about, as well as plans on important topics to the community.

Explaining their decisions were senior producer Travis Day, senior game designer Ryan Shwayder - who was involved in a lot of the outdoor content in the patch - and Morgan Day, another senior designer who works mainly on instanced content like dungeons and raids.

PCGN: How has the alteration in patch pacing changed things for the development team, and are you happy with it so far?

Travis Day: "One of the biggest things that we wanted to do in the Legion patch cycle is deliver on the promise of a continuous stream of content. I think that is a huge point of pride for the team. With patch 7.2 not only are we delivering exactly when we wanted to - you gotta understand, I started on the patch cycle about a year ago now, with the initial planning of it, so this has been in development quite some time. So not only are we delivering on the content pace that we wanted to hit and we feel is appropriate, but we're also delivering the largest patch in the history of WoW.

Similarly how has untying raids from patches affected things?

Morgan Day: "It's something that we have been doing for a little while now, we try to service as many different types of players as possible. Our raid philosophy really fits with our overall content philosophy, which is that we want to deliver steady, well-paced content as often as we can.

“We've learned that means you don't have to tie the raid with the patch - for instance Nighthold came out fairly recently and a lot of players are still working their way through that, enjoying that, still defeating bosses. A lot of people still haven't killed Gul'dan, right? The raid finder for him just came out a week or two ago. In this case it's a little too soon for Tomb of Sargeras, we're happy with the pacing so far.”

TD: "Morgan's touching on an important point, which is there is a huge number of different kinds of players of World of Warcraft and they're interested in absorbing different kinds of content. I think the bifurcation of the raids from the content patches is a positive thing because it allows us to deliver outdoor content. We’ve got an entire new zone, new world quests, new class world quests, buildings, order hall campaigns, assaults, pet battle dungeons - the list goes on and on of what we're delivering to the outdoor world player.

“Then we also have this raid that we've developed that is going to come out in the near future but timed more appropriately for the raiding community. I feel like we're doing a better job than ever servicing the different kinds of players on a time schedule that's most appropriate for them."

With flying introduced in this patch, how much easier has it been to do than in Warlords of Draenor and do you think you’ve found a reliable system for expansions going forward?

Ryan Shwayder: "We obviously learned a lot from Draenor when we implemented flying unlock there. We heard a lot of feedback from players. Splitting it up into Pathfinder Part One and Part Two has been, I think, really good. It lets players know ahead of time like ‘Okay, Pathfinder Part One is a thing that's going to get me on the right track for flight.' It lets people who are super-interested in flying get a headstart on that.

“We knew that once 7.2 rolled around we wanted to make sure the focus remained on mastery of the over-land world, the unlock requirements are still very outdoor focused. As far as future expansions go, as always, we take the lessons we learn from every expansion and move forward with that. I can't really speak to what we're going to do necessarily.”

TD: “Are we doing another WoW expansion, really?” [laughs]

The other major change is the additions to artifacts, has everything gone to plan there or have there been challenges you weren’t expecting?

TD: "One of the great things that I think artifacts really succeeded in was giving you a unique experience for each spec by having that artifact quest line that gives you a nice little story hit and introduces you to the world of Legion in a way that brings you up to speed with a class or a spec that you've never played before. I think there's a lot of success in that.

“I also think there's a lot of success in having a alternate progression path outside of whatever your item level is and acquiring new gear. Again earlier we were speaking [about] a lot of different types of players of WoW and I think that having artifact power as a reward that can be [given out] through doing all the content in the game is an effective way to reward players and give [them] an ongoing target, ongoing progression.

Source: www.pcgamesn.com
Related Posts
Categories
Latest Stories
Interesting How many entrepreneurs become millionaires where to get business cards...
Guide How to recharge car ac How much does it cost to replace a central air conditioning...
Reference Book How to prevent bell s palsy? How to do magic tricks with no equipment Le...
Resources Ust courses vegan crowdfunding adobe certification online class objectives...
We are supported Why business fail what business quarter are we in which manager has the...
Friendly sites