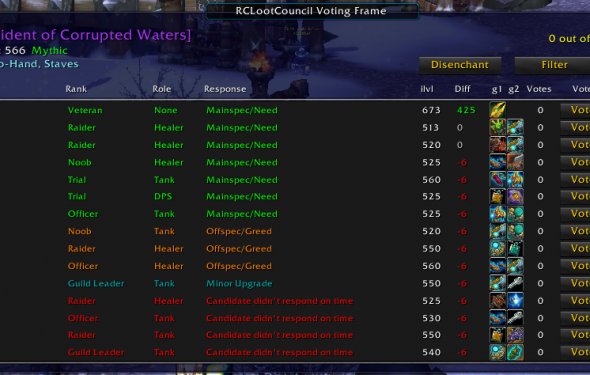 I'm so glad I kept mine in my bank in case this ever happened! The one time my pack rat personality paid off... :D

Ah, yes... the Rainbow Generator. I will never forget the time that our healer forgot to take it off for Mythic Blast Furnace. Good times. It's also good that this will never happen again. *cough*

Too bad it aint a double rainbow...

What does it meeeeeean?

With Rainbow Generator becoming a toy in Legion, I thought it might be useful to provide a list of the quests required to get this.

The quest line which leads directly to the quest, Open Their Eyes, which as of patch 6.2.3 still rewards the trinket, are as follows:

1. Do the Imp-Possible
2. See the Invisible
3. Touch the Untouchable
4. Break the Unbreakable

There are no prerequisite quests to start.

Just got this item from questing in Felwood and makes me wonder if the currecnt version of this item, a trinket, will be replaced with this or changed into it. I mean the live version could be a possible grandfathered item.

Never the less, its a nice toy.

On the PTR I tried to macro this in with my Frost Mage's Ray of Frost, sadly it did not work, would be wonderful to have an ice beam with a rainbow over it.

While I'm glad we have this toy, I will still not be completeing Open Their Eyes on any of my characters, because I will always want to make time to go to felwood, and take screenshots with Delaris's Prism

the only bad point is the long cooldown(10minutes) /sad

Anyone else have issues with theirs not working? I click on it and it acts like I'm casting it but nothing happens, and then it starts the 10 min cd anyway.

And what are you supposed to do if you have done the quest years ago but no longer have the trinket? Apart from cry that is.

Target someone before you use it or it will use the cooldown and no show a rainbow. Do run away from the target more than about 40 yards after clicking or it will prematurely end.

A few facts about rainbow generator:

- Has a pretty long reach. You can shoot a rainbow at a boss outside aggro range.
- Will not aggro.
- you can move around while the rainbow is active.

I got there did "Do the Imp-Possible" no problem. Turned it in & Impsy wasn't showing up. I flew all over Felwood hoping it was a phasing thing. After about 10mins, I got on an alt. Did the quest & same thing. No Impsy. A 110 DK came to where Impsy is & grabbed the 2nd quest See the Invisible.& I l know he did cuz he started killing oozes as you're suppose to. So I thought maybe if I reload, Impsy will appear. Nope...NADA! Sooo I just closed out of WoW completely, closed on my bnet desktop & everything. Restarted it, signed in & whatd'ya know? That little *!@# Impsy showed up, wasn't phased & had a quest for me. So I finished the 2nd quest, then 3rd (Touch the Untouchable, ) then 4th (Break the Unbreakable, ) & lastly the 5th (Open Their Eyes, ) which gives you the Rainbow Generator that we're all obviously going thru all this trouble for.

Thought i'd share in case someone has the same issue. Hope this helped! Thanks.

To get the full super rainbow effect your character should eat some Rainbow Fin Albacore and should be wearing Rainbow Band with the Rainbow Girdle, too while using their Rainbow Generator! xD
Source: www.wowhead.com
Related Posts
Categories
Latest Stories
Upgrading items wow As you’re probably aware we introduced a new system in 5.1 which allowed...
MR robot wow gear There’s a filter icon in the character menu bar. It’s your BFF when it...
wow item generator I m so glad I kept mine in my bank in case this ever happened! The one...
Wow gear stats The information isn t conflicting. It s all true. Gear stats in instanced...
Heirloom items in wow Patch 6.1 implemented the Heirlooms tab in the Collections interface, and...
Friendly sites